Of Medic Alerts and Hypo Unawareness 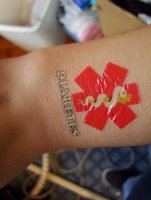 I've been thinking about hypoglycemic unawareness recently. I knew a couple of people who died from it, and its not a very pretty subject. Especially for insulin-sensitive folks like me. I think being insulin sensitive, one is much more prone to hypoglycemia(and extreme hypoglycemia) Its been years since I last had a "paramedic moment", (fortuantly) I don't know how some folks cope with frequent, severe lows. I'm beginning to see the value of medical alert bracelets. Of course, I don't always wear one- my first(and second) Medical Alert bracelets have been lost for a long time. As a teenager, I hardly wore them at all( only on clinic days!) Over the years, I've gotten-cheap necklaces, sneaker tags, keychain thingies but nothing very expensive. (I refuse to spend more on the bracelet, then I will on copay for the ER visit..) I like the temporary diabetes tattoos (see pic) available from the T.H.O.R. Foundation, you can stick them anywhere (somewhere not noticeable!). The problem is, not very many EMT's/paramedics are going to look for them. Especially if they're half-worn off, they'll see the emergency sign, think "Ah, thats nice, I wonder what they've got" and proceed in their cluelessness. I am an EMT, and its shocking the number of paramedics who don't look for a medical ID! Someone on the Insulin Pumpers list suggested wearing two ID's (in various spots- necklace/bracelet) so they could find it easier. I'm not going that far- but I think it is time to get another bracelet ID, found a cute one: 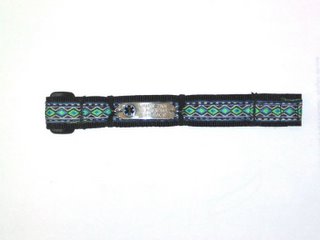 that I'll probably get. Its not that I don't like the expensive(r) ones..I just can't bring myself to shell out the $$'s on an item I'd rather not wear. (but I know I should!)
I wonder what percentage of people that do things right, by-the-book, check blood glucoses frequently, etc. still end up with permanant hypo unawareness. There's a differance between transiet (having a rough patch of hypos) and permanant (they can't get it back even when the run higher bgs for awhile) How many years of D did it take for any of ya'll to start having problems with this?
Posted by HVS at 7:48 PM

It seems that a paramedic would be less likely to notice a funky mostly fabric medical bracelet, than one that looks similar to the standard metal ones.

I went to a local indoor flea market and purchased a silver medical bracelet with a nicer link than the Medic Alert brand provided. The seller had a computer engraving machine and didn't charge extra for the engraving so lots of info was able to be put on the back.

Perhaps if you invest a bit more in one you like, you'll feel better about wearing it?

Hopelessly naive mother of a child with diabetes, Ellen! ;-)

thanks, Ellen.
Maybe someone should do a poll of paramedics on that issue..
they should be taught to be more aware of any of those things, regardless.

This is where my confusion lies - wouldn’t you want it somewhere noticeable. Like not your forehead, gut at least somewhat visible

***but at least somewhat visible

To answer your question I was by the book to the extreem, but still had hypo trouble.

It took me less than a year to "burn out" my abality to detect lows.

I'm always on the lookout for other people interested in tattoos. Glad I found you. Another site I would recommend on the subject is tattoos Happy Day.