When J was being born, amid the crazyness of water breaking and contractions and epidurals and hourly blood glucose checks and being dragged off to the OR at 2:30 am for a C-Section,we made sure everyone we came in contact with knew about this kit. Because, you only get one chance to tap this resource, and you better not miss that boat. 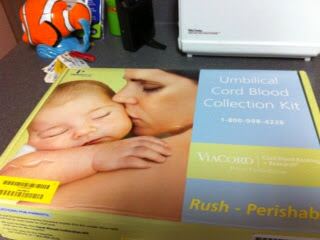 Yes, it made for a rather stressful time, but the hospital staff handled things just fine,and hand delivered it (that morning)to the courier person who rushed it off to the depths of some cryogenic safe to be stored, hopefully never to be used, but there, nonetheless.

Primarily, stem cells are being used to treat cancer..but research is being done into other diseases,including diabetes. And maybe one day they can be used to CURE diabetes.

There was a session at Friends for Life that was for parents with diabetes. For me, sitting in that room,surrounded by people on the other side of the parenting/diabetes equation it was kind of bittersweet. Because, while we talked about the day-to-day integration of parenting with diabetes, there were some hard topics discussed, topics that nobody likes to think about much less put out there but the reality was right there. Because the reality is, kids w/parents w/diabetes are much more likely to get diabetes themselves.(and there were parents there,who also had children with diabetes)

Dx'd young. Dx'd slightly older. Which brought up the issue- would you want to know? (ie, have them tested for antibodies) It's impossible to think rationally about this, and much easier to go back into ones comfort zone of trying NOT to think about it but the reality is, you can't hide from reality. Kids get dx'd with diabetes as babies,as toddlers,as school age,etc. They get dx'd on breastfed,they get dx'd as formula fed. They get dx'd on organic diets and they get dx'd on eating junk food. Nothing really "protects" you. (If genetically,you are predisposed)If you are tested,and you have antibodies, there's still no clear cut timeline as to if/when you'll develop diabetes. Some people even test negative and then develop diabetes anyway. (Trial Net does yearly follow up) So the question is, why would you want to put your kid through all that and not know anything anyway?(except a bunch of vague maybes)

And then I read this article, from a dad clearly in the same boat.(in terms of the psychological struggle) Maybe you are helping research, maybe some day they will develop a vaccine that can prevent type 1 diabetes entirely. (I'm game with that. I think any parent would rather have something for the rest of their lives rather then their kid get it. I'd rather see it prevented, then cured.) And maybe they are developing treatments that will prolong the life of the fizzling islet cells. But the bottom line is, knowledge is power, even if that knowledge devastates you. Life isn't meant to be lived in fear of what "might" happen, but neither is it meant to be lived in denial that something could ever happen.(somewhere,somewhere there's a balance)

Posted with Blogsy
Posted by HVS at 11:37 AM No comments:

In the beginning of my diabetes journey, a blood glucose reading was a thing written in stone, the Gospel truth.

I had no reason to doubt the number, to doubt the archaic brick of mid-90's technology that took a whopping 45 seconds to spit out that number. I was good, I was bad,that number ruled my life.(as well as my parents)


And then came the day when my blood glucose dropped from 77 to 33 in the space of about 10 minutes. As a good little PWD who actually was listening when the CDE taught Hypo 101, I drank juice & eagerly awaited the sensations of this, my first low blood sugar. (this was about a month post dx) Those sensations were not long in coming. Shakes, blurry vision,heart racing, numb face & tongue...I was convinced that I was dying. As my blood sugar continued to drop, my brother gave glucagon & sure enough, I was in the land of the 400's in double quick order.(thankfully.Woohoo for freaked out family members.)

I think that was the day that the seeds of doubt as to the accuracy of said meter(and strips in general) were first planted in my mind. The years (and circumstances) have set the mind set of double checking every extreme high, & taking the other numbers in the context of "this is X. It could be right but it's likely 20% off in either direction & I'm going to take that into account if I correct it." It ain't the lab draw,people.

But it shouldn't be that way, not for me or for anyone else. Lots of people base major insulin decisions off that one blood glucose, they cannot afford strips with better accuracy, cannot afford to test more then 2(or so) tests a day. At the very least, those strips should meet the minimum 20% guidelines by the FDA. Because their lives depend on it.

Where does the "big stick" part come in? Well, this is where YOU, the people, get to go (get off your rear end) & exercise your citizen rights(or even legal resident, because this issue pertains to you, if you live in America. And even in other countries like New Zealand, this is a big concern) Go here to get started.(gives you the sample letter and everything) I'm not a big political activist, the last time I contacted my representive in Congress it took a full two months to here back from them, but they DID respond.(I was impressed-a personal letter and everything.) They know who vote them into power.

Because you,& the lives of millions of people are at stake here. We need strips to be held to a standard, however loose that standard may be.(20% is bad enough, but It's better then nothing) And that's a cause I believe in.

Posted with Blogsy
Posted by HVS at 1:44 PM 2 comments:

(Warning: what you are about to read will probably disgust you...proceed with caution. And if you should read the entire thing do not,in any way, take the content therein then other then that of my own personal diabetes opinions.) 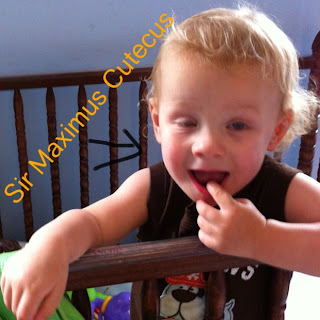 This is my child. He is 19 months old, bright,funny, a social-ite (and overall, quite healthy except for the occasional ear infection.)

Having said that, you may feel free to head over to a certain large diabetes website & listen to a webcast from a certain leading expert on diabetes & pregnancy.

I didn't make it very far,switching it off when I heard the words "I don't care about the mother. I only care about the baby."(apparently, it got even worse,when she said that every women with diabetes should have to view graphic!!dead baby images as a sort of scare tactic) In a flashback, I was back in my Endocrinologist's office again, crying hysterically over the best a1c of my life. Listening to her telling me that I was a horrible mother & killing my baby.)I had alot of guilt during pregnancy, guilt that because I couldn't reach that a1c that they wanted, my baby would surely be born impaired, or dead.(or I would die trying to reach that a1c) I spent the entire pregnancy locked in my little world of denial,& possibility of disaster.(yes, I had issues. A therapist probably could have helped.Trying to work through those.)
Here, on the other side, I can tell you that babies are tough little guys. I can tell you that doctors don't know it all, and sometimes a compromise must be made between what they want and the limits of you personally can handle. I can tell you (from the past)what a seizure from a low blood sugar feels like,& how I wasn't ever going to subject my baby to the effects of THAT(cut off of oxygen,brain damage, brain damage to baby?no thank you. I can tell you that given my a1c, my normal weight baby should have been fatter then he was..further proof that docs don't know it all.(and the guilt I feel when women with better control then mine beat themselves up for the weight of their baby. Please don't do that, you did a beautiful job. I'm convinced its 98% a genetics lottery.) We all do the best we can.
I'm convinced that the expert in question would be in favor of abortions for anyone not in the "under 6" crowd.(quote: There should be no surprises.) And while I worked my tail off during pregnancy, I wasn't (nor will I ever be..it's simply not safe for me in that subcategory. And I've further concluded, that many women with D decide not to have children because their doctors have played up the whole baby-is-doomed at X a1c scenario, which simply isn't true.(Not that you don't try to drop it ASAP,but it's much easier to drop actually after you get pregnant then before..it drops slightly naturally,and again,this is not medical advice in any way shape or form. Some people can actually get those sub 6 and sub 5 a1cs.(more power to ya,but not everyone can)But no pregnancy should be composed of docs (like her) telling you all those horrible things..we know. We know things can go wrong. We live it for ten months,every high,every low, every bite of food we put in our mouths. We hardly need a guilt accelerator.(She would never be my doc,not in a million years. I think my Endo, at least, kept the scare tactics under control for the most part when it became obvious that none of that crap was going to be true.)

Friends For Life: the Wednesday Prelude

Decisions are hard for me. 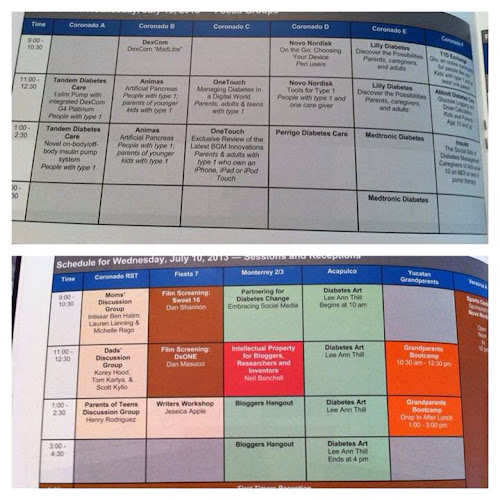 Which is how I found myself staring at the Friends for Life schedule, 15 minutes before the focus groups began,with still no earthly clue which one I wanted to attend.

The movie screenings looked pretty interesting, but the siren call of the traditional ones also beckoned. Visions of potential Disney gift cards danced in my mind, and which focus groups might actually stand and deliver.(it's kind of a guessing game) Except for the last session of the day, which my friend and I actually sought out the rep to sign up for. In the end,these were the ones I did. And I kind of missed out on most of the social media ones, because it's impossible to be three places at one time. (and I missed out on Diabetes Art as well)

Novonordisk: choosing your device.(pen) This one was pretty good, but I can't talk about it due to the contract-in-blood that they made us sign. I'm sure you understand.

Animas: Artificial Pancreas. I would have preferred the Tandom session, but it was full. Ours was totally snoozefest, basically putting a bunch of happy/sad faces on their poster(of AP idea features).

Medtronic Diabetes. More confidentiality forms, but this one yielded a small Lenny the Lion and a $50 Disney Gift Card. (it was quite intensive and lengthy) Love the company, hate the pump.(or something like that)

Then I went to hang out in the Bloggers hangout, and met someone from Twitter that I've talked to. It's pretty cool, putting names with faces but I struggle with overwhelming the poor souls(who are you again? ) and for that reason, I really don't feel I should say anything unless they actually kinda-sorta-know me. Half the interwebz reads their blogs. About five people actually read mine. 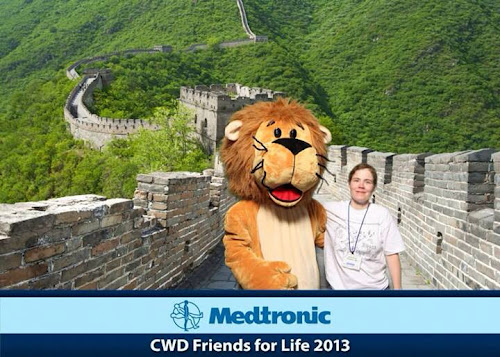 (the Lion & Me: we'ze cool. Photo in the exhibit hall. My kid loves his little Lenny the Lion(joining the big Lenny we got last year.) Although he still calls it "bear" as he can't tell the difference yet.)

Posted with Blogsy
Posted by HVS at 4:43 PM 2 comments: