I've fallen in love with the greatest personal organizer...ever.

Found it at Michaels(crafting supply store in the US). I'm sure variations exist in any hardwear/craft store..but I like this particular one because its just perfect for my D-needs.If you're like me, & your bedside stand is a confusing jumble of used test strips,candy wrappers, and other D-(& one low can create that in a hurry)... Then you'll recognize the need to have something to maintain order from the chaos. This fits that need...perfectly.

It has 1 large central space..the perfect size for a bottle of glucose tabs (&/or a can of Diet Coke...)

Just off the central compartment, two smaller compartments can house your D-supplies quite comfortably. (I have my PDM/strips/lancing device in one..and a spare pod/insulin vial/syringe on the other side. They don't get mixed up,and I can deal with each situation separately.I don't have to worry about spilling Diet Coke into a sea of used test strips already covering my phone.

There are 4 side (2 in each side)pockets..great for tucking a roll of glucose tabs or pack of candy into. (or an empty canister,to dispose of used test strips)

Or even a CGM receiver. (no more searching the room because you aren't sure where that shrieking is coming from)

Finally, there is another (open) pouch off the one side...and a velcroed pouch off the other.(perfect for anything else you might need...like a phone(to tweet those early morning "Diabetes Sux!?!" messages...) or a pack of breath mints...or a small pack of tissues after reading an especially emotional blog post...

And the stand-up handle is awesome..it could almost be a purse or murse.(there is a paisley inside print,but the one I got is a pretty solid black on the outside & tape could be placed,to obscure what is showing,if that offended you. It also came in purple/pink at the craft store. Neither of those is a favorite color of mine,so I went with the black. Although the inside print is hardly noticeable.) It's very portable,very trip-friendly, and I think I'll be going back to get several of these. (at $6.99, a reasonable price,IMO)

(as always,no one paid me to write this..the opinions expressed therein are my own & I paid for said product out of my own pocket.)

What do you use to keep your D-stuff organized?
- Posted using BlogPress from my iPhone

Scare Yourself Every Day: The D-Chronicles 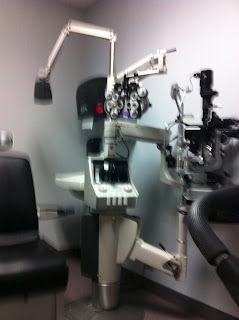 I'm not sure what I was expecting...something like the above, perhaps. (it didn't look like that at all)

Anyhow, I came, I saw,I signed 3 consent forms & was duly eye dilated(R) up. Was taken back to a separate waiting room where two other patients joined me as the baby made shrieking noises to pass the time. Dr. S(paghettio),my ever so buyount opthamologist came to take us over to the lasaring room (where I parked the baby stroller in the corner),& put my head on the device rest.

"This can't possibly be painful," said Dr. Spaghettio, noting the look of deep consternation on my face.


"Not painful to the eye..it just sounds horrible."

(I think that was my brain-this is not a pleasant experience.)


"There is no way this can be painful!" Dr. S. continued to insist.

(whatever, dude. I don't think you've ever had a lasar zapping around inside your eye

It was only a few minutes of this, yet felt like lightyears.

"Great." I get up from the chair, locate my baby and my sunglasses, and roll on out
of there. "I hope that's done it."

(painkiller time. I'm not sure where he got the idea that said lasaring is never
painful,maybe because he's never had a patient under the age of 40 to go through this. Perhaps older people have a higher tolerance to pain then younger folks.)


It seems to have been somewhat effective...I'm hoping a few more days & it'll be as good as the left eye. Anyhow, I can now cross that one off my Reverse Bucket List. (I'm sure it won't be the last time a lasar goes zapping around in there).

Smearing my hair with applesauce. 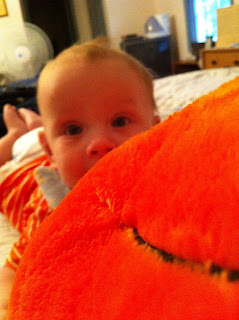 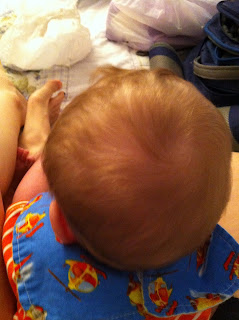 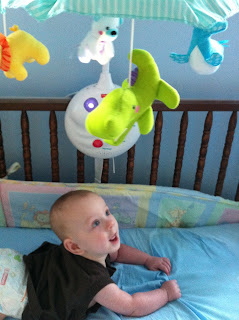 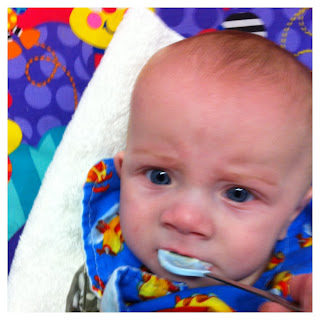 Not sure what to think of this stuff called...food. (4 months old)

Getting measured for a helmet.

Posted using BlogPress from my iPhone 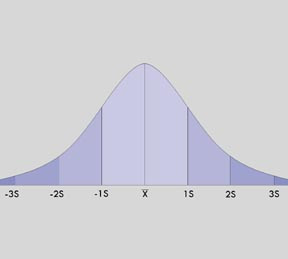 (if I were a dot on this graph, I'd have been to the farrrr right)

In 2005, I boarded a plane bound for Florida...bound for this place I'd heard about, called Friends for Life. To say that I was nervous would be the understatement of the year. (I was going to room with someone I'd barely met from the Internet chatroom) I didn't know a soul. (and I also didn't tell my parents where I was going, lest they unduly freak out. Wise, nu?)

When I got there, there was no red carpet, no welcoming committee. The CWD young adults of today were still teens, doing teen stuff..and I was at the wayyyy far end of that bell curve, struggling to see where I could fit into all this. Yes, I could pretend to be a teenager(I still looked like one) but in the end, I (& my friend) were out in the cold. 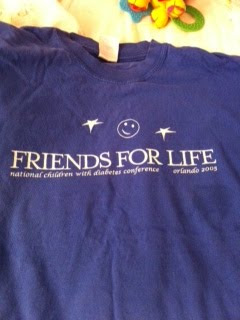 (and that is how I found myself volunteering to chaperone a bunch of crazy teens...at midnight. Never again, is all I can say.Although I respect each and everyone who does so, that's not my cup of tea.)

Seven years later, I don't feel alone (above and beyond the baby/husband in tow factor) anymore when I go to that conference-there are friends everywhere. And that (semi-crazy) fellow PWD that I met off the internet is now a very good friend, not the ax-murderess one would assume they would be. I've grown as a person (one who wouldn't say two words at that first conference,I've always been somewhat of an introvert) and a PWD(knowledge base= double arrows up). And the friends I've met haven't been limited to fellow PWD...spouses of PWD, siblings of PWD, exhibiters, as well as parents of CWD.(it takes a village, and all that jazz)


Many more "outliers" are coming to FFL now..and those teenagers are growing up, getting married,etc. The bell curve is shifting and its not such an odd thing anymore to go to a "Children with Diabetes" conference.

But it still is a "Children with Diabetes" conference, and while more adult programming is making its way into it, at its core, it seems like that will never change. Too earth-shattering to change to "Children and Adults with Diabetes." Not to mention it probably won't sit well with Johnson and Johnson.It started out CWD, and will likely remain so. And for some adults,that's likely to be a point of major contention.

So where is this all going? I don't know. But I can't help feeling that somewhere down the proverbial pike, CWD is going to be faced with that decision (to change the name) because so many adults with D will be coming to this conference..and the fallout may not be pretty. I personally don't care about the name, I love it regardless (people don't ostrocize you just because you don't have a CWD) but it does infer a certain stand-offish status to those who don't have a CWD. CWD is going to have to adapt to this and the shift in the bell curve, perhaps very soon/very quickly (depending on how many T1's do decide to come,and judging from what I read on FB/Twitter there's alot of interest out there). The adult programming is coming along pretty well,they've had some great sessions this year. Scholarships for (adult) PWD also need to be established.

I think that there's room under this big o'le umbrella for us all...CWD or not. (we all need somewhere to feel normal/loved/accepted) 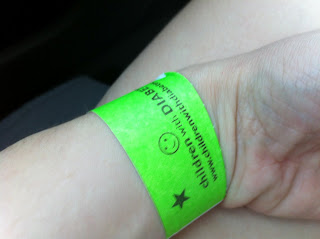 The Laser & The Type One 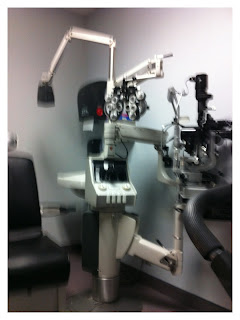 I've got alot to say about the awesomeness that was Friends For Life...but the most important thing to take care of (post-conferance)was a follow-up with my eye doctor. (each year, they offer a pretty in-depth screening..photographing everything & giving you pics to take home with you. This year, they used a new piece of technology that photographed the thickness of the retina...& detects any "air pockets" that could mean future vessel issues) Well,last fall (in the final weeks of pregnancy)a floater popped up in my right eye(duly freaking me out)..& it wasn't anything significant, just related to age. I just had to learn to live with it. Which I did. However, this year's FFL eye scan revealed complete clouding of my right eye lens & they recommended going back to the eye doctor. (yet again)

So I did that. I really like my eye doctor, he looks like Brad Pitt's (younger) brother. (and he doesn't rip into me about my current a1c) Dilated up,and he spent like 3 minutes looking around, leaned back,and announced that the R eye definetly needed that laser (the left eye isn't to the point of occluding vision yet). I guess since the floater occurred,I've just learned to live with the not-so-sharp vision.

This kind of laser burns a hole through the "sac" overgrowth that obscures the lens. (months/years after cataract surgery) It isn't D-related,& it supposedly isn't painful.However,it is a procedure (and thus,had to be scheduled for "Procedure Day")& like anything else eyeball related,they have to give you a list of (extremily rare) scary potential side effects.(and now I see why you wouldn't want it done unless the eye was completely clouded) I have hope that it will clear up the cloudiness in that eye some. (which I had assumed to be from floaters) It isn't exactly like having cataracts was,because I was stone cold blind from those,& its only noticable in that one eye. Anyway, I'm ready to just get this done...& hopefully, it will help. Once that eye is done, the problem won't reoccur in that eye.(there's the other one sometime down the line, to be dealt with then) Virtually everyone who has an IOL implant for cataracts has to get this laser done..so I don't feel like its my fault or anything.My retinas, thankfully, are still doing fine.