- A snazzy new G4 Dexcom, which even though I had to drive 15 miles (to a store)because FedEx refused to drop it off without someone being present, is still a good thing. Opinion still being formed, but I think it's going to be really awesome for my (lack of) diabetes control.

Slapped a sensor on last night,after charging the receiver for three hours. Well,"slapped" being a rather mild version of what actually went down...more like flubbed attempt #1 (wasted sensor=scream at the sky)& taped the heck out of sensor #2, because if I didn't, they never stay in. I have learned that while inserting a sensor,if it hurts severely to pull back the needle/tape & try somewhere else,or it will turn into a blood bath. Mild pain means the goings still good. So,after poking around on my left thigh for 2-3 spots I finally found a good spot & stuck it in. Two hours after insertion,it was ready for calibration.(from there,it swung up & down all night..seems to be stabler today) Initial thoughts:it gets back on track MUCH faster then the Dex 7 (when calibrated). I love it's sleek,iPod-esque physique...& hate the case it came in.(useless snaps everywhere)

New boots. I've never been much of a boots person,but these were on sale for a mere $22 at Kmart & hot diggity,are they awesome. Perhaps they won't last a long time but they are comfy with that bit of flair & make me look much more fashion conscious then I actually am. I can't stop wearing 'em.

- For tissues,Tylenol, cough drops, & a hubby who will help out with the kiddo when I'm dying. Colds never really die in the household with a young child..they just get recycled and come back a month later. (see also,kids are still normal acting even when they are sick. Which is both good,& bad)

- A certain little guy is now starting to stand, & to pull himself up on stuff.(much to my relief, as he's been slightly delayed in reaching that milestone) And he now says "Mama" which totally wraps me around his little finger & makes me his slave for life. I could never get tired of hearing that, I don't think. It's usually in the context of wanting food(he loves to eat). In a couple of weeks, he may be able to get his helmet off(depending on the results of the head scan.)


- Posted using BlogPress from my iPhone

Apparently it involved glucose tabs, candy, & a rebound right up to where I was trying to get down from in the first place..cannot wait to get that G4...especially since I left my Dex 7 at my SIL's house & have been CGM-less for 5 days now. 2.5 hours of my life just blurred by. #WipeOutHypo

- Posted using BlogPress from my iPhone

It was his first Halloween. 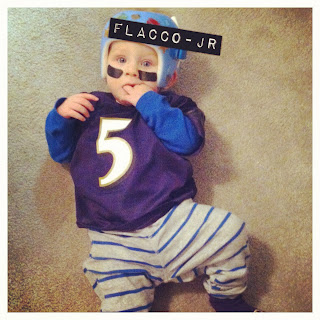 And in a way, mine too. Because my upbringing was such, that Halloween wasn't/isn't/shouldn't be ever celebrated..I never went trick-or-treating,etc. as a kid.(some may see that as deprivation but what you've never done, you don't miss.) When you've been taught something & consequently, never done something your entire life, change comes hard. (doing something you've always been taught is wrong feels like committing some horrible,horrible sin akin to murder) You've got to rethink things for yourself, & 98% of America isn't any help (as they've always done it too, Christians included). And basically I've come to a somewhat unsettled self-acceptance that for us, personally,some aspects of Halloween are harmless, (and this is not a reflection on what you, personally,think about it) & this includes trick-or-treating. It's basically kids & candy,and I don't see a problem with that. (although I take issue with the parts that are at odds with Christianity)I won't let him dress up as something that we feel to be wrong, & that's that. (my husband did go trick-or-treating as a kid,but both of us are in agreement on this matter. Anyway, I don't have any experience in this..but I dressed him up in a baby Ravens jersey, socks,onesie/pants/ his helmet/undereye black tape thingies (that all football players seem to wear), got a pail,and prepared to hit the neighborhood about 6:30'ish. Hurricane Sandy was kind to us, power stayed on and no trees smashed up our house/street so other then being damp/chilly, it was ok conditions.

Unfortuently, my blood sugars decided they didn't want to play nicely,& 2 minutes out of the house I started feeling low. Drank a juice box. (still low) Walked around the neighborhood,talking to the neighbors & showing off the cute bebe...still felt low, drank another juice box. Shot up to 250. When you are trick-or-treating with an infant,you get a bunch of blank stares & "Can he eat this?" as people try to figure out what is safe to give him (much like trick-or-treating with a child with diabetes, or celiac). The answer to that question is: "Everything's fine." (because Mommy/Daddy will be eating it all anyway). I guess we're all just moochers...but this is a first experience, not really all that interested in the candy anyway. (if people choose to give it, they should know whats the likely scenario as to how it will be consumed) 20 minutes later, walked back to the house...and yet another up-and-coming-potential low popped up on my meter(79). Hubby went to go do early voting,and I drank another juice box/ate some candy/drank another juice box/fed another bottle/changed-put baby to bed/checked blood sugar again (220)/checked blood sugar 1.5 hours later (130)/crashed into bed. Fun times in 'betesville that night. (however, I did include as part of the Big Blue Test, so somewhere, someone benefited from my bizarro blood sugar evening. He took it well,no major meltdowns beyond the initial being scared of the dark bit. (which dissapated after I held him for awhile) 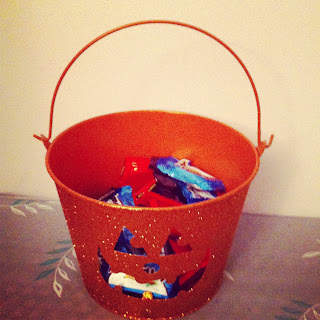 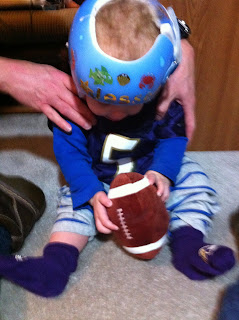