The Sweet, The Salty, & The Rogue Pancreas

I used to think that getting any disease that restricted the intake of certain foods would be the absolute end of the universe. I've always loved food(like 95% of the human race) & find it something to be enjoyed. Growing up, I lived on a farm(& thus was able to inhale vast quantities in keeping with my teenage metabolism). And then diabetes entered the picture & the first order of business was to get me to gain weight, a lot of weight, so they put me on a 2400 calorie a day diet & gain weight I did-52 lbs. (which took me out of the death camp look and into the solidly chubs look. Quite frankly, the insulins I was on did nothing to help me to lose any of that, it was "feed the insulin" pretty much 24/7. And then I went on a pump, and successfully lost 20 lbs (mostly just from not having to stuff my face so much) Weight stayed pretty stable, within 10 lbs for a number of years. Pregnancy (and turning 30) came, gained 45 lbs, lost 40 lbs pretty much 2-3 weeks post delivery. (Has stayed stable since) I'm happy with my weight, but I wish more of it were muscle.(being able to wrangle a screaming,kicking,psychotic 28 lb toddler up to bed hardly counts) 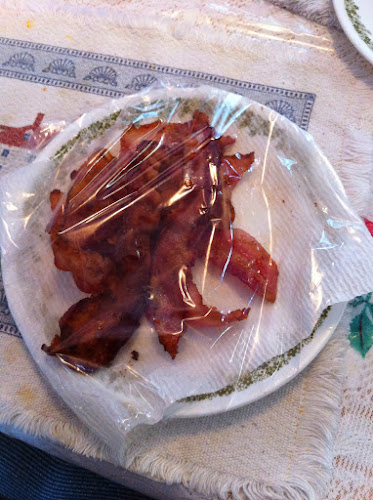 (Who doesn't love bacon? Even meatless bacon..if you're a vegetarian)

I love food, & I pretty much eat it whenever, wherever. Gluten rocks my universe, meat/cheese are must haves, and yes, I eat HFCS containing products, on occasion. (Anybody left reading this?)And I love my diet coke.( I think the only disease that I absolutely couldn't handle would be one where I couldn't have any soft drinks.) I'm aware that no one warns to give up gluten unless it is for valid health reasons, & my intent is NOT to make you hate me for waxing poetic about my love of gluten..this is just journaling thoughts from a person who has very little clue what a challenge staying GF must be. However, that being said, I know a lot of people lately who have had to go GF because of celiac disease and my knowledge on the subject has exponentially grown. There's still a lot of food that you can eat, and eating fresh fruits/veggies forces you to eat more healthy foods. (Fritos are GF. Win!!!!! I could live off that and homemade rice/Chinese-ish dishes the rest of my life, if need be.) Although I think I could accept celiac a lot more now (in my life, not affecting my loved ones) my screening test at Friends for Life was negative. I have other digestive issues...pseudo gallbladderitis (in June) which might be vaguely related to my stupid minuscule, disappearing pancreas. My Endo did some more antibody tests to further determine if my pancreas is still attacking itself(if so, at some point I will start having to take digestive enzymes because my pancreas will stop producing them. And glucagon will no longer be effective in a severe low.) If said pancreas disappears entirely, I will pretty solidly have diabetes(and any potential cure treatments that materialize I'd be ineligable for). Basically I might have diabetes for the rest of my life.(not that I was expecting one soon but eventually,yeah) The Artificial Pancreas would still be a major help in my life, though. (I don't mind doing the matinence stuff as long as the thing gives me a long, healthy life)

In the meantime, I'll drown my woes in bacon & diet coke.

Posted with Blogsy
Posted by HVS at 2:29 PM 2 comments:

On the day that I failed nursing school, I kissed my husband & son goodbye in the wee hours of the morning, climbed into my car, & drove into the city to go to the hospital. As I was in the 2nd lane of the left turn lanes, following several other cars, preparing to turn left along came another car barreling straight towards me at what felt like ten billion miles per hour. "It's going to stop," I thought, not really expecting otherwise. That light for them was solidly in the red.

But it didn't stop. And by the time I'd processed this & swerved my car straight, it was like I could literally feel the whoosh of a near head on collision with said car. And then I went on to clinicals, had the absolute worst day in the history of mankind, and it was all over. But here's the thing..some might call me lucky(being alive is a hecka lot better then failing out of nursing school). I don't believe in luck, I know I've got a guardian angel on call 24 hours a day and I won't be leaving this planet until God deems fit. I won't say that failing has been easy to accept either, but I do know I'd make a good nurse(and maybe that will be as an LPN until I get whatever stuff together that I need to get together. The instructor made me feel a tad better by telling me that their program was the hardest one in the state,& students who have failed theirs have gone to others and passed.) It just won't be happening any time soon.

So now I'm 3/4 of an RN..starting from the beginning. The grief is still quite raw, the negative thoughts inhabit my nightmares each and every night. It is literally like a part of me has died. (And it's probably going to take awhile not to feel that way)

One day at a time.

Life is chock full o' crazy right now, it's the 6th out of 8 weeks in the Med Surg/Mental Health rotation. I'm not going to personally comment on what that is like, but I focus on two main things (exam prep, and surviving each clinical day without getting expelled from the program) & count down the days till the insanity will be over.(if it weren't the Internet, I could tell you a lot more) As for that little thing called diabetes..it's been downgraded to the very last thing on my to do list. I have absolutely ZERO time to deal with low blood sugars, and my bg average is pretty high. Survival dictates getting all your patient care done/charting in the computer/giving medications/ongoing assessments/nursing diagnoses care plans done in 5 hours that you are on the floor (& nobody dying)or you will get a plan for success. Fortuently, this insanity is only for a couple of days a week but it is tough. The goal is to turn you into a fast-thinking nurse, but when you feel like you don't know anything every second of every minute of that time it is really stressful. Not to mention the instructor has eyes like a hawk and if you even look like you might be having a low, you may get questioned/& possibly sent home. I really don't know how that even fits into the whole "diabetes accommodations" thing I have in place, but their line of reasoning is that those are the requirements of the program/what the real world is like.

Exam 3 is on Monday, and the final exam is in two weeks. 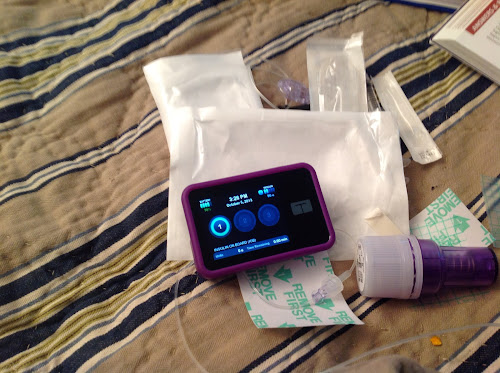 Several weeks ago, I made the switch to the Tandom T-Slim..I am officially done with Omnipod. The Rep stopped communicating with me(RE: my need for a new PDM, having gone through about 15 pods & figuring out that the issue lay with the device itself) and I couldn't reach any of the company higher-ups. Insulet is having both supply issues and new pod issues, so this isn't surprising, but the manner in which the area Rep treated me really ticked me off.(she said she'd get me a new PDM, and then just stopped talking to me. I left several phone messages,etc, with no response. The Tandom Rep confirmed that said rep is a bit of a mental case.) The rep came out to our house & ran through the nuts and bolts of things. (Because if I have to read anything else not connected with nursing school, my brain will explode)

Customer Service rocks. I had a pump within two weeks of faxing the info to Tandom. And my Endo rocks, for randomly just approving it out of the blue with no communication from me regarding my pump switch.

I really like this pump. The reservoir fill process is a bit lengthy, but not horrid. And I use Apidra without any clogging problems.

I love the bolus calculator(by which you can add up various numbers of carbs just by pressing the + button) So, so sleek and sexy.(also better for my control!) And although I'm not a fan of being retethered, it's actually better for control when you can bolus whenever and not have to physically be hunting for the bolusing remote. And although I don't hate Insulet, I am very disappointed in them as a company right now. A local friend is also on the Tslim & she encouraged me to go on it.(it's awesome meeting PWD who live literally 10 minutes away & go to the same Endo you do!) I highly recommend this pump..the days of scrolling through numbers is just SO 20th century.(it's all touch screen, with appropriate safety measures/locks in place)

So that's life right now...plus dealing with the govt shutdown, which put my hubby on unpaid furlough to who knows when.(we have savings but its still stressful) I really hope they clear up this mess pretty soon, I think both sides are at fault here. We can't keep spending ourselves(as a nation) into more debt, we need to trim all these extra non-essential stupid programs(jmo) and cutting waste. It's just pathetic.(and yet, we also need this agreed upon..these functions MUST go on, if we are to continue as a country)

Posted with Blogsy
Posted by HVS at 5:19 PM 3 comments: