Its Never as Simple as it looks 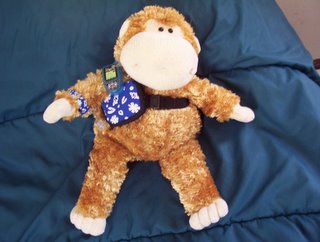 HERE HE IS! My brand new Pumpernickel, the pump monkey.. Got it from Fifty-50 a few days ago, along with a medical ID bracelet and EMLA type numbing spray. He's so cute, his tubing can come out of his mini-Cozmo, and its very realistic. Like me, his infusion set never stays in..
(you gotta tape it on)
And in the working world,I received an email from Austria recently. Yeah, thats right, Austria. I don't know anyone in Austria, but it was sent through Ebay- so I figured it wasn't spam.Subject title was in German. Good thing the email wasn't in German. (I don't know German!)
Buyer wanted to know why their item (that they sent specific instructions to be sent to a friend of theirs in CA) wasn't there (in Austria) yet. So I told them, and that hopefully cleared up the miscommunication, haven't recieved any neg. feedback or death threats..
Ebay is awesome this time of year. You can sell things used, (good condition, of course) for more then you payed for it originally. Triple the amount, then it usually sells for. One month ago, a certain computer cd game was barely clearing $5- mine sold for $30 today. Good thing too, because I'm spending as much as I'm making. (buying people gifts!)
I'm on chapter 2, in BGAT. Talk about confusing. Its about the insulin overlapping action.
Plugged in all my basals, boluses, (and times) and it gives a nice little graph showing WHEN you're most likely to be high, or low from the insulin surges. (Interlapping basal- bolus) It bears no corrolation to the real world, in which I'm most likely to be low: midmorning, midafternoon.
Their graph says I should be low early evening, and high after lunch...
This is next week's homework. 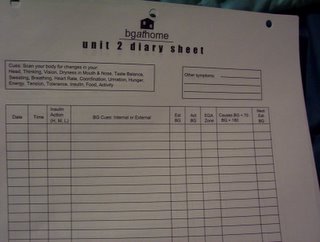 And this, is my insulin plot graph. (that I've yet to truly figure out) 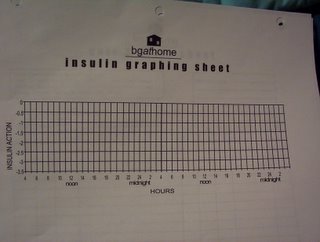 This week, on Tuesday, I'm due to go in for my EMG. (local hospital) I'm going to tell them I don't want to know the results till after Christmas. I'll also return my meter( Lifescan Study), to have that downloaded. Thank goodness that study, at least, is done! Because its nearing the end of the year, its time to get all 7 prescriptions refilled, and another box of syringes. (for Symlin) I think every year the insurance companies make it their resolution to raise copays, but especially RX's. Mine are bad- but I'm sure they'll get worse!
Posted by HVS at 1:41 PM

Hey I had a couple of questions for you. I've heard a lot about symlin and I'm very interested but I guess I don't really understand how it works, especially while on the pump. Another question that I have is, I've heard it helps you to loose weight...have you had any experience with that or no? Ug... write back k? thanks!!! and by the way ... pumpernickel is adorable!!! i want one!

Bethany,
I think Symlin slows down the post-meal "spike", anyway it slows down the movement of food through the stomach. So it takes less food to make you hungry. It also makes you nausues at first(some people, severely so) but once you get past that, it still makes you not as hungry. And it takes a certain amount of carbs, before you inject it.(anything under 30 carbs, I don't inject Symlin for)I once made the mistake of taking it with very little insulin(1 u,low carb meal)gave me a stomach ache so bad I thought I was going to die. (Never again) I lost about 5 lbs, but I don't take Symlin but once a day now.(low dose)I take it once a day, because the doc doesn't want me losing too much weight. You generally start at a set dose(2 U/meal) and keep on that for a few days until you work through the nausea issues, then the doc sets it to 5, 7, 10, etc. depending on what you can handle..
it gets a bit confusing, as you also have to keep track of the changing bolus ratios (and with me, I had to adjust basals as well) but it controls post meal glucose extremily well-never have I had a number over 140 when using the stuff.(2 hours post)
good luck..
Pumpernickel was expensive-but worth it!:-)

Now where was it you found Pumpernickle?