The Story of a Birth: Part 2

Room #317 was seemingly like any other room on the post-partum floor, but with one large, noticeable difference. 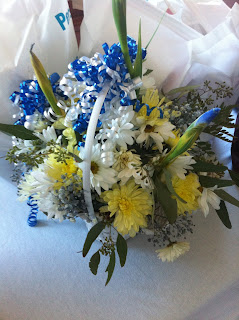 Minus the baby. Because a half-hour after moving in, a rechecked blood sugar was a 32 (normal, for a baby, is above 40) and a formula feeding only resulted in a 28, so the baby was whisked off to the NICU for blood sugar observation. (and a subsequent Dextrose IV) I couldn't go anywhere, because I was tied to the bed (literally) with compression leg thingies and that urinary catheter (for the first 24 hours). In my mind, I didn't expect him to be there that long and it was somewhat relieving that they were monitoring him while I could get a few hours of sleep. And sleep was odd, because for the first time in 7 months, I could do it on my back & do so with the aid of painkillers that actually worked. Attempting any sort of movement was just as difficult as during the later part of pregnancy. I was plenty hungry but only got soft liquid-ish stuff for the first 24 hours(per protocol). In the afternoon, they took my IV out & I re-inserted my Ominipod system after another doctor showed up,poked around,and said that she trusted I knew what I was doing in that regard. (not really,but I could see that she didn't, so I figured strict blood sugar management was not a priority anymore) I cut my basals by about 66% across the board,and my bolus ratios by 50-75%. I didn't want to be either too aggressive or too passive,but clearly diabetes was still there, it hadn't gone anywhere.(some people are lucky enough not to need any insulin at all,after delivery) That worked well, for the most part.

The next morning, they removed the urinary catheter/compression thingies and told me to get out of bed. So I got out of bed,took a shower,and crawled right back into bed.(moving was very painful) My parents visited,and we went down to the NICU where they said that although the baby's blood glucose was now normal,his temperature was now too low so he'd have to stay in the NICU to be monitored for that.

Tuesday passed,and Wednesday as well.By Wednesday evening,it became obvious that I was going to be discharged & the baby wouldn't..his temperature just wasn't coming up. To add to this, his bilirubin levels rose (so they did about a day of photo therapy),and his platelet count dropped,so they were concerned about infection & started him on antibiotics. The blood culture from that was negative for infection.(but they tend to give antibiotics when there is any risk at all for infection)

Wednesday,my post-lunch bg was 276 and my OB nurse freaked out, calling in a CDE. This CDE was exceptionally short on bedside manners as well & the resulting conversation was a waste of both mine, and hers, time. I don't think she quite understood the concept of a POD (like an infusion set) going bad. And she sprinkled in too many examples of other patient's "brittle diabetes" horror stories. (I don't like that term,and I don't believe in it)Five minutes in, she answered a phone call from a doctor
(dealing with someone's very high bg)and neither one of them treated the patient with much respect.This lasted for about 15 minutes,during which time she didn't go off/handle it privately...it was all in front of me.
Fun times.(I needed another pain med dose after that conversation) I demonstrated to my nurse how to change a POD, she'd never seen one before.(just regular insulin pumps) And that was pretty neat, because she asked lots of questions/was genuinely interested in it all.(her husband is a type 2)

Thursday was a black,black morning..for I knew that my 4-day stay in Paradise was coming to a close, the insurance company sure wasn't going to let me stay anymore $2000+ days. Things were healing well,& I had no problem moving around/walking at this point, so it meant that I'd be discharged(probably before 10 AM). At 4:30 am, I woke up & started bawling..and that went on through the 5:30 AM vampire blood draw. At 6, Dr. Tired-OB-Of-the-Week-Before showed up.

"Why is your blood glucose so high?!" (my pre,and post lunch bgs had been hanging out in the mid-200's)

I shrugged,trying to hold it all in.

"Because you're eating Crap Food-what is that,Cheetos and Pepsi?" he poked at a lone bag on the bedside table.

"That's DIET Pepsi." (thank you very much!!!!and that's not Cheetos, that's a bag of candy, which I'm using for low blood sugars. Not that you care.)

"So how are you doing today?"

I burst into tears.

"He won't be there for long-he just needs a little extra time,the low blood sugars probably set off the temperature issues. He's not seriously ill,he'll be out soon."

(I knew that,but just the fact that he's in the NICU at all has made me a basket case & you're just not getting it, are you? And there's no "OUT" in sight.)

"I'll discharge you later today-not by 10 AM, so you can stay with him longer,ok?"

(yeah,thank goodness for that small favor)

Therapy time over, he moved on to the next victim/patient. And I resumed crying, until at 8:30 AM my nurse showed up, fed me painkillers and hot tea,and had a lovely 3 hour therapy-cry-a-thon session with my post-pregnancy hormones. After that,I was a bit more ready to deal with the situation as I could see that it wouldn't do my baby any good if I didn't get well myself. It still wasn't ok that he was still in the hospital, but I could at least walk out the door myself without constantly sobbing.I still felt like crying(at the drop of hat,and would do so,quite frequently) Other babies crying (on the floor) also made me feel that way. My job was to get better,and their's was to make him better.

At 4:30, I was discharged,my husband & I went down to the NICU...fed him,held him,etc. ate some dinner, and then went home, where I crashed into bed,exhausted beyond exhausted. Coming home (from the hospital) without your baby never feels right.
Posted by HVS at 8:35 PM

I did that - came home without the baby. It sucked. He's 30+ now and it still sucks. Walking into the house with an empty nursery sucked.
Basically it all sucked.
But - he came home and all was good.
Not a good memory... It was tough.