In the interest of wanting to get this vacation account over ASAP, before everyone stops reading my blog for good, this will be short & sweet.

The last "real" day in England, we had a private tour guide. His name was Peter, and he was a certified Blue Badge Guide(r) who had been doing this longer then I've been in existence.(so he was quite good)

First, we went to Stonehenge.

It was raining & chilly & generally not the nicest of days to be out and about, but Stonehenge was neat.


I took my own video..but with a flip,and from 100 yards away it wasn't very high quality.(is that why they named it the flip-because the videos are not worth "a flip"?) Hopefully this one will give you some idea of some of the mystery/mystique surrounding Stonehenge. They were smaller then I thought they'd be(the stones), but after 3500 years I'm sure they were quite impressive in that day.They are still impressive...just really worn down. In the hills surrounding Stonehenge, there are burial mounds, chalked with lime so it really had to do with something pertaining to the dead. Once a year, on the Summer Solstice, you're allowed to go up and touch the stones. The Druids/Hippies/Weirdos use that day to get naked & do whatever they do.(according to the tour guide, I don't think you want to come to Stonehenge on that day.)And there are always weird crop circle stuff popping up in the fields surrounding Stonehenge.

Then we went to the gift shop,and I bought some earrings(in the shape of the rocks) as a memento of our journey. Being in Europe...there are some names that more popular then in the United States, my own name being one of them. I rarely/never run into another person with it. There were some Germans in that shop though,and one of them was named "Heidi." It felt really, really weird to hear someone else calling someone else with my name.

Then, it was off to the city of Bath.

(on the way, we stopped at a pub for lunch and I had Heidi Pie.(a combination of goat cheese,sweet potato,spinach, and onion in a pastry crust. It was divine) 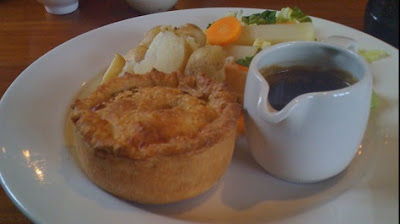 We then poked around the Roman Baths. It was very much like it was back in the 2nd century AD, minus the enclosed roof. That fell off, and it would be too expensive to put back on. Besides, tampering with a piece of history would feel so wrong. The hot springs still pump out water at 120F, after all this time.(you wouldn't want to bathe in it though-the water is green from the algae) At the end of the tour, you get a sample of the water to drink.(its not from that particular pool) And its untreated, though they must test it someway because no one has ever died from it yet. I drank it, and my husband's(he didn't like the taste). It failed to cure the sore throat I had, but it was comforting.

A Wishing Pool...(some brilliant American had thrown several $1 bills in there. IN A POOL OF WATER. How dumb can you possibly be?) 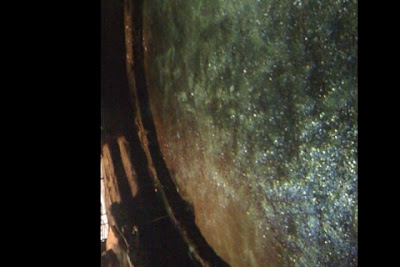 And I had my picture taken with Robbie the Roman. (not digitally though, and it was a wax figure so my husband didn't object too much) Went to the Bath cathedral, explored some of the shops.
Then we drove back to the hotel.
(and took a river cruise down the Thames the next morning)