Well, my role in the BGAT clinical trial is NOT over. Now the control group has to go through BGAT. There are 7 "chapters" in BGAT, each to take a week. 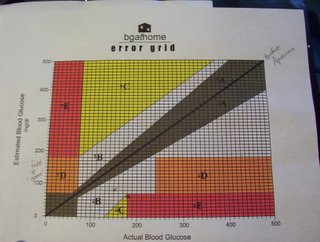 This chart is my referance "Error Grid." It tells me what kind of faulty logic I'm committing on a regular basis. ( every time I test!) The line down the center indicates perfect agreement between the estimated blood glucose, and the actual glucose. And the dark gray area indicates almost perfect agreement. (lower A, upper A) Say you think your blood glucose is 420, and its actually 380- its not going to greatly affect your decision on what to do. Every bg meter has a +/- 10 accuracy rate, too..( to be considered acceptable)
Lower B means you estimate your bg lower then it actually is.
Upper B means you overestimate your bg. Again, it depends on the numbers as to whether this is dangerous but those babies are in white, so its not of much concern.
Lower C (C is yellow, for caution)- estimate bg much lower then actual BG. I've done this(haven't we all?) Its a fine excuse to overeat, and wonder where the resulting 400's came from.
Upper C- estimate bg much higher then actual bg. Its a case of "I'm thirsty, I must be high, so instead of checking I think I'll just bolus a couple of units."
Lower D (D for Danger- Red)- Estimate bg in target, when its actually too high. You won't do anything about it, and that really screws up your next a1c.
Upper D- Estimate bg in target, when its actually low. It'll shortly dip into the upper E zone.
Lower E (E for Emergency-Orange)- Estimate bg too low, when its actually too high. You eat, thereby making the problem even worse!
Upper E- Estimate BG too high when actual BG is too low. Just don't even think about this one- this has got to be the worst! (taking extra insulin, passing out, maybe not even surviving!)
I'm getting fairly good at guessing in the A zone. In the mornings- I just go ahead and guess 300's anyway, because I have a major dawn phenomenon thing going on. No sense in guessing what I WANT it to be. (I also have the problem with counting carbs sometimes- I want it to be x amount, so I'm going to bolus for x amount, and don't bother me with what it really is!) But its making me look horribly irresponsible (on paper), so I'm trying to do better, trying to be as exact as possible. I think there should also be a sub-category for guessing wayyy too low when you're actually slightly low! That effects how many carbs you should eat, and I've never in my life had just 15 carbs work for a mild low, much less the biggies.
Now I've progressed to the "homework"- estimating, checking symptoms, time/date and my BG zone, in a chart. That will be for a week- then its on to chapter 2...
And meanwhile, I've still got 5 days left on the other diabetes clinical trial, I'm probably spending several hours every day just recording numbers, carbs, etc! This is too much like statistics.(final exam on that is Tuesday, last test on Monday)
Posted by HVS at 7:43 AM

hi Bethany,
You can check www.centerwatch.com's diabetes clinical trials, google it, or check at your endos office if they are involved with a large medical center that does such things. I saw a posting on the bullitan board(at the endos office), thats how I first got hooked. good luck, they are ok (once they're over with..lol)

Wait a Minute... READ THIS... I would like you to know about toxic mold symptoms. If you are getting sick often. Visit ..http://moldnhome.com . If You see black powder looking dust on your walls or floors that could be the toxic mold symptoms I'm Talking about.. This can be cleaned with bleach most of the time but beware of how you clean and dispose of the paper towel that you use.